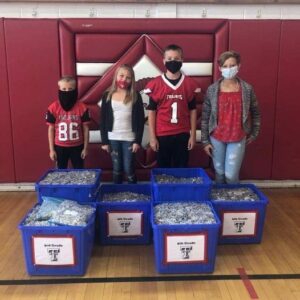 Kids Can’t Fight Cancer Alone declared a tab war between Canton and Troy Area School Districts. The proceeds were donated to RMHD in memory of Zach Roan, a “warrior” from the Canton community. Canton was the proud winner but hats off to both districts for collecting an awesome total of 1,332 lbs of tabs!